Sox Win a Tense One 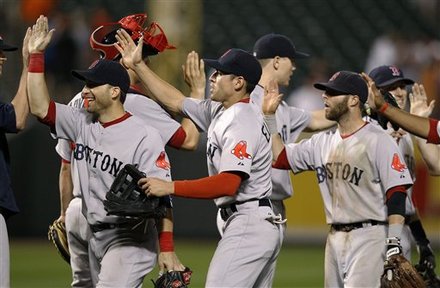 That was tense. The Sox' bats kept pulling away, but the Orioles kept coming. Nothing was easy. Just ask Papelbon after he needed 28 pitches for one inning (he needed 29 on Sunday).

The bats needed to come alive, as Bedard just wasn't good enough. Again. Thankfully, the Sox have Alfredo Aceves, who is the biggest unsung hero of the team. 3.2 innings from him (getting 1 more out than Bedard could), as he deservedly got win #10. He's pitched 113 innings this year in 54 appearances (only 4 of those were starts). Without him, the Sox are eliminated from contention over a week ago.

Daniel Bard sucks. I couldn't believe Francona didn't have Papelbon ready to come in to get the last out of the 8th. There's no way in hell that this guy is ready to be a closer.

Before last night, some people probably didn't know who Ryan Lavarnway was. After last night, I don't think anyone doesn't know who he is. He started off with a pickoff, then hits a 3 run homer, then a solo shot as an encore. He's 24, he hit .467 his junior year at Yale. He was hitting .295 in Pawtucket this year. Maybe he's a spark that this team desperately needs.

Ellsbury furthered his MVP bid with a 2 run homer in the 2nd. But another guy who has been contributing down the stretch is Scutaro. His 2 out double extended the inning that Ellsbury hit his homer in. Later, Scutaro hit a 2 run shot of his own. He's hitting .368 in September.

Now we wait for Game #162. The Rays beat the Yankees, thanks in part to a bases loaded triple play. So we wait. Jon Lester will take the mound for the Sox. He's 14-0 in his career against Baltimore. Though it's only his second career start on 3 days rest. That other start didn't go well (4 runs in 5 innings back in April of '08), but he only threw 55 pitches on Saturday so maybe he'll be better rested.

The O's will counter with Alfredo Simon who is 4-9 with a 4.85 ERA. He's a righty journeyman and not very good. There's no reason for the Sox to not score runs off him. He allowed 3 in 4.2 innings against the Sox earlier this year.

And if necessary, the AL Wild Card playoff game would be Thursday at 4:07, and would be in St. Petersburg.