I Don't Like the Francona Move, But I Understand It 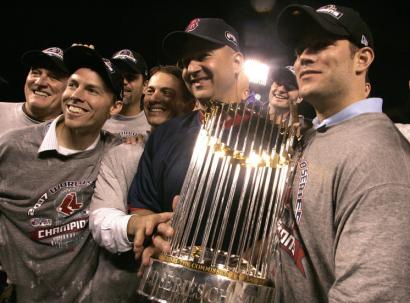 Although he wasn't fired, and although it seemed to be a mutual breakup, the Red Sox' owners were not supporting Francona. Even if Francona wanted to work in such an environment, I doubt the Sox were going to pickup his option. There have already been reports that the ownership decided 2 weeks ago to cut him lose. This seems like a mutual breakup but it's not. Imagine if your girlfriend said "I'm not attracted to you and want to sleep with other men." You probably wouldn't want to see her anymore, but it wouldn't be a mutual breakup.

The Red Sox' collapse was not Terry Francona's fault. At least not nearly as much as the players' fault. No manager, no matter how insightful, inspiring, or ingenious, could get Erik Bedard to be anything but Erik Bedard. No manager could coax a shred of decency from John Lackey.

A very vocal and very stupid minority in Red Sox Nation are blaming Francona for lack of control in the clubhouse. The leaked incident about starting pitchers drinking during games is being used as People's Exhibit A against Francona, who has always been a player's manager.

It's funny how this vocal minority aren't blaming the grown men who acted like this. Francona isn't a disciplinarian, but he's not supposed to be a babysitter. During a game, is he supposed to do surprise inspections of the clubhouse? Like some college dorm RA, looking for booze.

Erik Bedard doesn't strike me as a good character. Some players, when they get a chance to play for a contender in a pennant race, step up their performance. Bedard seemed to lazily cruise.

JD Drew, at the very least, is not a positive influence.

Josh Beckett is a fraud. He's a fake Texas Tough Guy. He's a wannabe Stone Cold Steve Austin that gets sidelined by blisters and the slightest of illnesses. I can't say he was a clubhouse problem, but he doesn't seem to be much of a leader.

Then there's the excuse makers. Every time this team struggled, there were excuses. Injuries. The lack of a DH in interleague play. God. Et cetera.

This clubhouse was full of babies and jerks. And while they were winning, these character flaws were hidden. They were exposed when the losing started. It's the chicken and the egg, really. Does poor chemistry cause losing, or does losing cause poor chemistry. One thing I know from the past is that good chemistry prevents losing from lasting too long (See: 2004 ALCS).

Blaming Francona for how adults act is a bit silly. He's not a schoolteacher or a babysitter. He's a baseball manager. And he is who he is. He's not going to change his style because the players under his charge are misbehaving.

But even though it's not his fault that the players didn't respect him, when the situation deteriorates like it did in September, it's time to change managers. If employees don't respect their supervisor, even if it's not the supervisor's fault, you have to change supervisors.

The question now is who replaces Francona? Who replaces a man who averaged 93 wins in his 8 seasons here? Who replaces a 2 time World Series winner? Who replaces a guy who handled players like Manny Ramirez and Kevin Youkilis while simultaneously handling the Boston Sports Media and did so while never throwing anyone under the bus? What kind of man can juggle that well?

The Nation wants discipline. But Earl Weaver is not walking through that door.

To be honest, I don't think changing the managerial situation will turn this team around. Signing a top starting pitcher (CJ Wilson would be nice), giving Lackey his outright release (it's a better investment to pay him $15 million to not pitch here), getting Buchholz and Youkilis back, adding a reliable set-up man to the bullpen. These are the things that will bring October baseball back to Boston.
Posted by rob at 11:00 AM