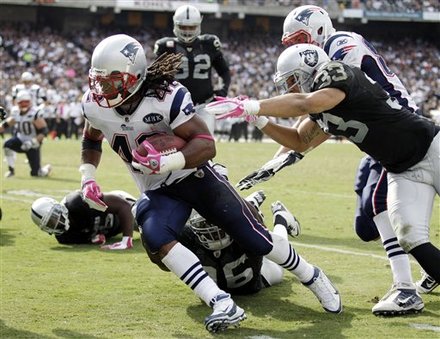 It wasn't immaculate, but the Patriots got back to the business of winning in Oakland Sunday afternoon, thanks to Wes Welker, Vince Wilfork, and some Raiders' penalties.

It's safe to say that Welker is back. He caught 9 passes for 158 yards. He's on pace for 160 receptions. He's Brady's favorite target again, he's getting yards after the catch, he's getting himself open on 3rd downs.

Vince Wilfork is the defensive MVP of the Patriots. He not only holds down the middle of the defensive line (which is extra hard on the road as Haynesworth apparently does not like to travel), but now he's making plays. Two interceptions this season, which is only one shy of Arrington for the team lead.

Turnovers saved the Patriots in this game. Chung's interception ended an Oakland drive that should have been a touchdown. The Pats do not have a good defense, but if they can retrieve the ball (and the offense can hang on to it), then they can be saved.

I had a thought during this game. Why not use Matthew Slater as a defensive back? He can't be much worse in coverage than the safeties currently employed by the Pats, and at least he can tackle.

I'm glad the Patriots fully utilized Ridley. 97 yards on 10 carries, and a touchdown. He can be more effective than Ellis (getting more yards per carry), and more dependable than Woodhead to get those 2 must-have yards.

The Pats are now tied with the Bills for first, with a big divisional game this Sunday. Jets at Patriots, Sunday at 4:15.