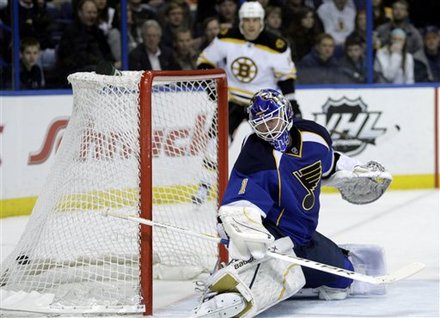 The St. Louis Blues hadn't lost a home game in regulation since December 3rd. This was a Step-Up game for the B's. Their key players all needed to Step-Up. Krejci had to play on the wing, Chara had to be a shutdown defenseman, and Thomas had to play well in net. Someone needed to score, too.

All that happened last night. And Marchand stepped-up to be the scorer. But his goals, like so many that these Bruins score, were products of solid play by his teammates. Chara's neutral zone presence, then Bergeron forcing a turnover gave Marchand his first opportunity. And it was Bergeron and Seguin who did likewise for his second.

This team based, decentralized scoring is why the Bruins are so streaky. When Bergeron is playing well, Marchand gets hot. When Bergeron is slumping, Marchand fails to produce. The same goes for Krejci and Lucic, and the rest of the forwards. Entire lines are either red hot or ice cold. There's no middle-ground when one forward slumps but the other two on a line are playing well. The whole line slumps.

Krejci played an uncharacteristically physical game as a winger. He needed a good night on the ice before we should expect to see some good stat nights. He was still +2 with 2 shots on goal and 2 hits.

Chara played defense the way he should. All the Bruins defensemen have to do on any given night is do their job. It's simple to say, sometimes difficult to do.

Thomas was very good. The second goal he allowed saw him slightly out of position. I'm unaccustomed to seeing him over-commit as he seemed to do, leaving 1/3 of the net open. But he atoned for it with the 30 saves he made.

The Bruins are in Buffalo Friday night. It would be nice to remind the Sabres that they are a 12th place team.