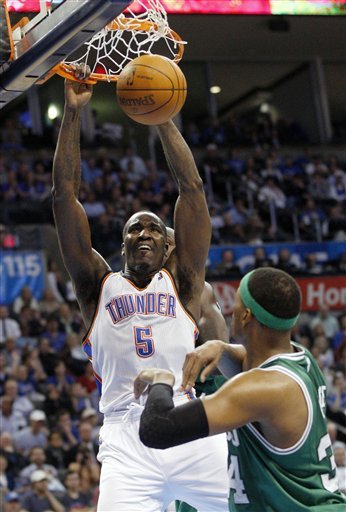 Despite putting up 104 points, the Celtics simply could not keep pace with the Thunder last night. Each of the Big Three scored 20+, but it wasn't enough. The Celtics' bench only contributed 9. Meanwhile, OKC's scoring was more concentrated (Westbrook had 31, Durant 28, Harden and Cook each with 17), but also more potent.

The Thunder outrebounded the C's 43 to 32, including 10 offensive rebounds. 50 points in the paint for the Thunder.

If the Celtics had Rondo, I suppose they could have made this game interesting. This was an elite opponent that's been nearly unbeatable at home. So just by itself, this loss shouldn't depress C's fans. But even putting this game aside, there isn't much to be cheerful about either. Five straight losses, 7 of 8, and Cleveland is breathing down the C's necks for 8th place in the East.

If the Celtics lose in Cleveland next Tuesday, they'll be tied with them in the loss column.

This season has been painful to watch. There have been glimpses of possibilities of chances. Their last win in Chicago, for instance. But I don't think the Celtics have shown that they're capable of contending to win a playoff series against a good team.

I think it's time to seriously consider selling some of this team off and building for the future. There's no glory in finishing 6th in the Eastern Conference (which looks quite optimistic at the moment), being eliminated in a 6 game series, and keeping all your aging talent, along with your young but inconsistent talent.