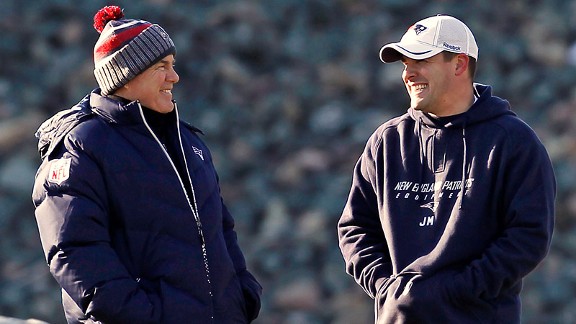 I love the sports media. All media, really. They all follow the same formula when "following" a story.

Step 1: Find an interesting fact. In this case, the fact that Josh McDaniels is actively refusing head coaching vacancies. But simply regurgitating facts isn't enough to justify a journalist's paycheck. We need to know why and it's the journalist's job to tell us.

After step 1, the journalist has an option, A difficult Step 2 or an easy Step 2.

Easy Step 2: Speculate why. Guess. It's not only easier and faster, you get to choose the most sensational guess to cover and discuss. So the story is always as interesting as possible.

Step 3: Opine. Give opinions. If you are on the speculative track, your opinions should reflect that by being strong, extreme, and inflexible. Because it's best to have a solid, immovable opinion when your facts are flimsy.

Facts and truth have little to do with journalism. At least not the journalism that anyone reads or cares about. And this lack of facts is not just true in the sports media, by the way, it's politics, entertainment, financial news. Everything. Interesting speculation and extreme opinions get more attention than simple facts and moderate opinions.

So here's my sensational Josh McDaniels speculation: I think if the Patriots win this Super Bowl, Bill Belichick will retire within a month. He'll set up his heir-apparent McDaniels with a team that still has Brady, and has a young talented defense. Belichick gets to retire but his legacy lives on.

Here's my reasonable speculation: McDaniels has already failed as a head coach. The next chance he gets will likely be his last. The current vacancies aren't with teams that have good situations. They're mostly teams mired in turmoil. McDaniels might want to wait for a more favorable situation to arise.

Here's my absurd speculation: McDaniels is secretly married to Jonathan Kraft, and the two of them used Gisele Bundchen to be a surrogate mother to a child conceived using DNA from McDaniels and Belichick's daughter. The pregnancy was accompanied by dark sacrifices and Satanic rituals, overseen by evil wizard Ernie Adams. The child will one day coach the Patriots, bring the world as we know it to an end, and win 8 Super Bowl titles.