Patriots Get Hats and T-Shirts for Christmas 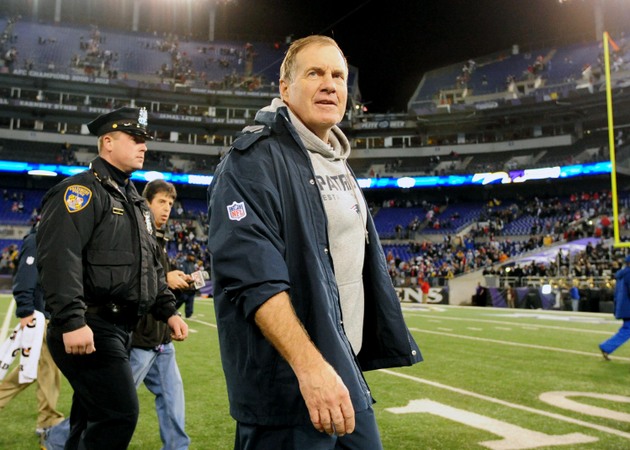 Throughout the week, the doom and gloom, sky is falling, Chicken Little, bah humbug Patriots fans and pundits out there were terrified of the Ravens. But everyone (myself included) overlooked two facts:

1. The Ravens offense failed to score a touchdown against Detroit, and only a miraculous field goal gave them a win.

2. Joe Flacco would be playing hurt.

The Ravens, particularly Flacco, played a horrendous game Sunday. Along with his bad knee, he seemed to play with a strained decision making muscle in his brain. He had a few token deep chucks. Other times he didn't notice open receivers. It was ugly.

His teammates joined in the ugliness. Penalties at the worst times, dropped passes. A variety of stocking stuffers given as gifts to the Patriots.

The Patriots offense didn't do well either. There's plenty of coal to be given to that side of the ball. They were successful on the ground, but for some reason went away from the run in the second half. Almost as if they were trying to preemptively adjust to Baltimore's adjustments to their success. Josh McDaniels' over-cleverness strikes again.

On the good list, LeGarrette Blount ran strong and piled up 76 yards on 17 carries. Stevan Ridley protected the ball and ran for 54 physical yards. As a team the Patriots rushed for 142, averaging 4.8 per carry.

Here's an alarming stat. The Pats averaged 4.8 yards per rush, and only 6.6 yards per pass. And that doesn't include sacks. Including sacks they averaged 5.6 yards per pass play. Brady was 14 for 26. He scattered a few great throws. He made a few very bad throws. Edelman caught 7 passes, or half of Brady's completions. Nobody else caught more than 2.

Thankfully the defense stepped up for the Pats. Misfit elf Dont'a (similar to dentist) Hightower actually made a good play in coverage. And that resulted in an interception.

The defensive star was Logan Ryan. Two interceptions and 3 passes defended for the rookie from Rutgers. "Rudolph" Ryan led the way for the defense.

The Ravens turned the ball over 4 times. It was like the football was a Yankee Swap present that nobody wanted. The Patriots did their part to protect the football and take advantage of those turnovers.

Both teams also benefited from soft pass interference penalties in the end zone. That issue deserves its own post to discuss. If not for those calls, the Patriots offense might have looked even worse, and the Ravens might still be mired in an 8 quarter scoreless drought.

The Patriots clinched the AFC East before the game kicked off, thanks to Buffalo beating Miami. That's 11 division titles for Brady and Belichick. The Patriots are currently the #2 seed, which they can clinch (along with the bye) if they beat Buffalo next week. That game has been flexed to 4:25pm. They can gain the #1 seed with a win and a Denver loss to Oakland. Stranger things have happened this season.