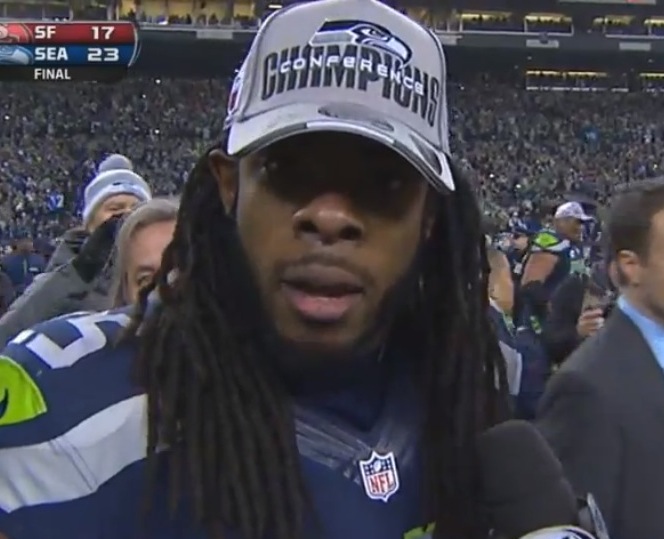 Immediately after this frightening interview, Richard Sherman became the center of the football world. But I don't think what he said was out of line. How he said it was shocking. I bet Erin Andrews wishes she could go back to interviewing Koji Uehara's son. Sherman was hyped up, in the moment. That whole team rails adderall anyway so we shouldn't be surprised when one of their most energetic players has a bit too much energy.

Sherman talked trash about his opponent. So what. Wasn't that what we were primed for in this game? "These teams hate each other." We heard that all week. Sherman expressed the hate we'd been told to expect, then he gets criticized for it?

He didn't do or say anything violent, anything inappropriate, anything obscene. And when he had calmed down later his interviews were heavy helpings of the same flavorless porridge we get from everyone else.

I suppose what he said was technically "classless," since it wasn't classy. But if we go out and look for classless things in pro sports, we'll be very busy. Sherman isn't any more classless than most athletes. What he did was bring his true personality to a segment of sports coverage we've been conditioned to expect polished and polite responses. Thank teammates, thank coaches, option to thank family and/or God, praise opponent, then for some reason say "thank you" to the interviewer. Sherman was himself for an interview. Who cares?

The outcry in response to Sherman's "classlessness" ironically verged on being more classless and inappropriate. Justin Verlander, who plays baseball, which is not football, Tweeted this...

So Russell is a class act! Sherman on the other hand.... If he played baseball would get a high and tight fastball.
— Justin Verlander (@JustinVerlander) January 20, 2014

Is that tweet considered classy or classless? I'm not a member of the Classless Police, so please tell me.

So this baseball player is suggesting that if an NFL defensive back were to play baseball, he'd be taught a lesson. Okay, Justin. I respect Verlander as a pitcher, as an athlete, and for hooking up with Kate Upton. But baseball players shouldn't be touting the physicality of their sport to football players.

Maybe I find all this Sherman backlash to be amusing and trivial because I'm a Patriots fan. I've heard my favorite athletes and coach called "classless" countless times. The word carries little weight with me. And if you are a Patriots fan and you have a problem with Sherman being "classless," remember that in 2006 the Patriots celebrated a playoff win over San Diego by dancing on the Chargers' logo, and we all ripped LaDainian Tomlinson for whining about classiness and classlessness. And in the Patriots-Eagles Super Bowl Mike Vrabel flapped his arms like the Eagles after scoring a touchdown. It's an emotional game.

So don't be a hypocrite. Don't hate Sherman because he was emotional and in the moment. I thought he acted like a bit of a clown. And a good clown is an entertaining one. But also kind of scary. And Sherman pulled that off Sunday night.