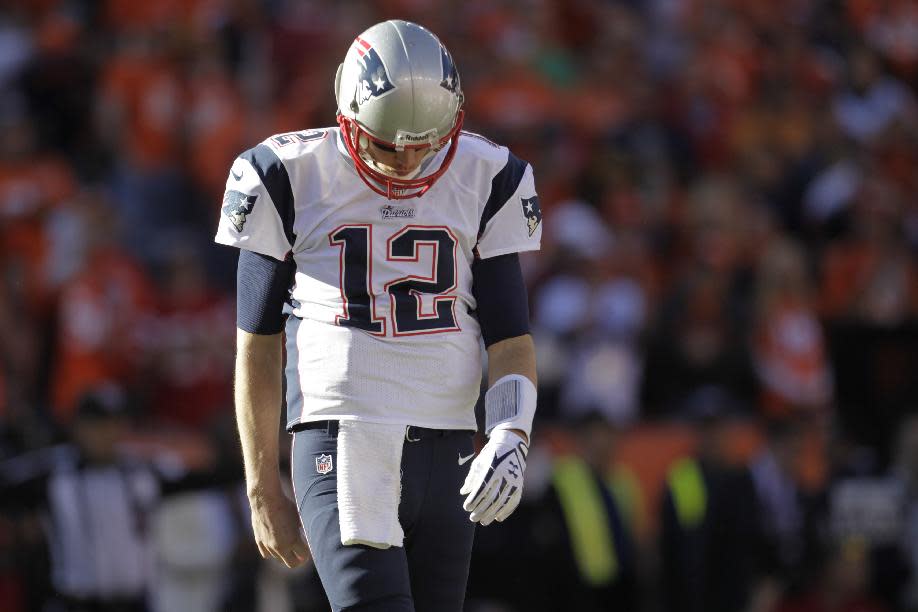 Pressure. The game of football is about pressure. You pressure an opponent, they pressure you, and the clock pressures everyone. To win you must put pressure on an opponent and play well under pressure.

On Sunday the Patriots failed to put any significant pressure on Peyton Manning. For all the talk about Manning struggling in pressure situations, he never found himself in one. The defense rarely pressured him in the pocket, his receivers weren't pressured (especially once Aqib Talib left the game), and the Patriots offense didn't pressure him to put up points.

The Pats gave up 2 touchdowns and 4 field goals. That's not bad against the Broncos. That was the third fewest points they've scored this season. The Pats defense didn't allow a huge number of points but they allowed yardage and possession time. They allowed almost 0.3 miles of offense. And they couldn't make a big third down stop.

The offensive side of the ball was an even bigger letdown. Before Denver went to softer coverage in the 4th quarter, Brady threw only a handful of good passes. He overthrew Julian Edelman on what could have been a touchdown. He missed Austin Collie just before halftime on what would have been a huge gain. What happens in this game if these two plays are made?

The plays were there. The Patriots didn't make them. In the 2nd quarter on 3rd and 9, Manning threw a duck into double coverage. And if Kyle Arrington had turned around to play the ball he probably would have intercepted it. At the very least he would have broken the play up and ended the drive. Instead it was caught by Welker for a first down. The Broncos went on to score a touchdown on that drive.

While the Patriots failed to make big plays, the Broncos succeeded. On the same drive that Arrington could have had an interception, Knowshon Moreno gained 28 yards on a 3rd and 10 draw. The Broncos sacked Brady on a pivotal 3rd and 8 play the next drive, and later in the game on a 4th and 2 attempt. Last week I wrote about the timing of big plays the Patriots made against the Colts. This week the Broncos had excellent timing against the Pats.

Tom Brady had an awful game. Maybe he has an injured hand. Maybe he has the flu. Maybe he just had a bad day. Whatever the cause, the effect was a hole dug too deeply to get out of. The defense could have done better, maybe gotten off the field on a few 3rd downs, but I think the blame for this loss lies mostly with the offense. Three points in three quarters? The Pats only scored when Denver's defense eased up.

To be fair to Brady he didn't have much to work with. With a struggling running game the offense looked shabby, like the Patriots had picked people from the stands to play. Shane Vereen was the second most targeted receiver. Danny Amendola did nothing, and had a big fat drop. You're targeting Matthew Slater and Matthew Mulligan. And when receivers did beat coverage, Brady either missed them or he was sacked.

It was an anticlimactic end to what was an exciting season. I'm not as miserable as most fans are. I enjoyed the ride, not knowing where or when it would end. I didn't set my expectations high for this team. I didn't set any expectations. I had hopes and I had doubts. The Patriots did better than my most pessimistic doubts and didn't do as well as my highest hopes.

The one thing I'm disappointed in is that the Patriots didn't go out with their best fight. They went out with a fizzle, not a bang. I think there were some missed opportunities early in this game. I think the defense could have been a bit more disguised. I would have liked to see some sellout blitzes. You couldn't take out all 4 of Manning's weapons, so focus on attacking Manning. Take a risk. What's the worse that can happen? You get burnt for a touchdown, but at least the drive is short.

The off-season should be interesting. So will next season, Pats fans, so cheer up.