I'm not a fan of Yoenis Cespedes 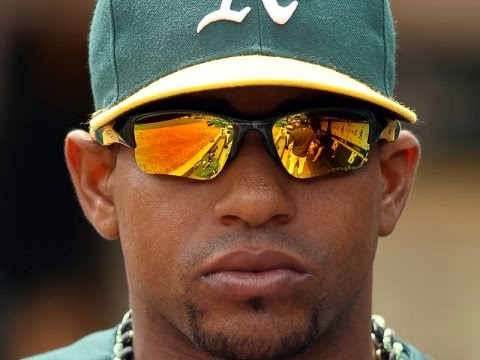 The Red Sox traded Jon Lester along with Jonny Gomes to Oakland for an outfielder with decent power who doesn't get on base as often as you'd like.

That's Yoenis Cespedes. Cespedes will also be costing the Sox $10.5 million in 2015, and is scheduled to hit free agency after that.

He hit 26 homeruns last year and 23 the year before. He's on pace to hit a similar amount this year. He'll probably be more of a power hitter in Fenway's friendly confines. Nevertheless, his career OBP is .318, and that just sucks for someone you want to hit in the middle of the lineup. He doesn't walk much, he does strike out a lot, he doesn't see lots of pitches.

He's an improvement, don't get me wrong. He's a solid player, he's better than anything the Sox have in the outfield today. But he's what you get for your Ace? For the guy who was your playoffs MVP last year? For a guy who won games for you this year even with some of the worst run support in baseball?

The Red Sox didn't sign Lester because they were worried about the future. So the future is this 20-30 HR outfielder who strikes out a lot and struggles to get on base 30% of the time? That's the future the Sox intend to build?