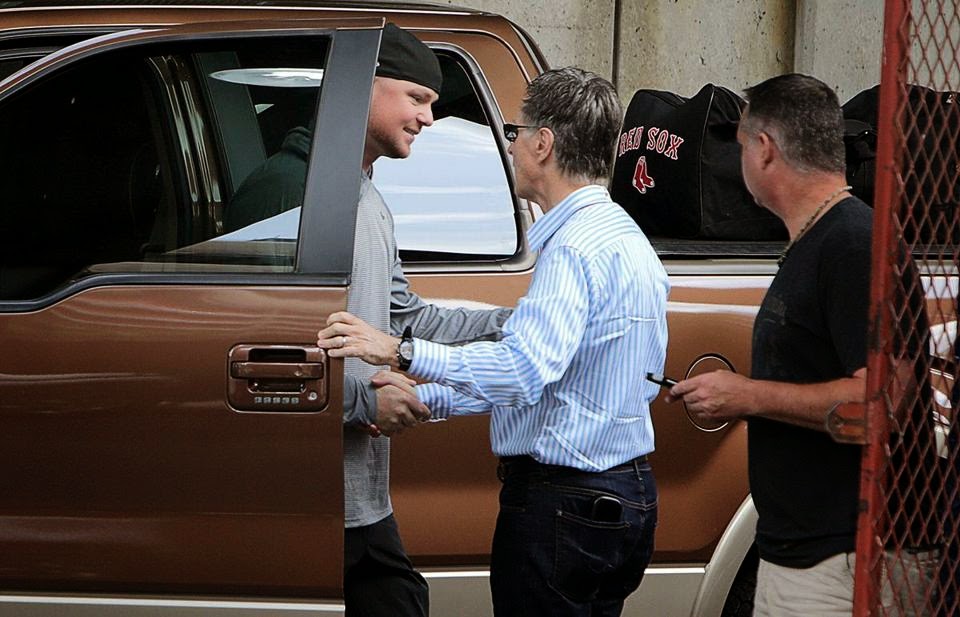 I'd rather have Yoenis Cespedes now than next to nothing when Jon Lester walks as a free agent. That's not why I'm disappointed/enraged at the Red Sox today. I'm mad because I'd much much much MUCH rather have Jon Lester over Yoenis Cespedes. There's essentially nobody the Sox could have gotten in exchange for Lester that would have left me content. Unfortunately the Sox made no legitimate effort to keep Lester here. The fact that he's gone, and that we'll never know how much of a hometown discount he would have accepted to stay, leaves me shaking my head.

How could the Red Sox do this to themselves?

The Sox traded a guy who had recently become a bona fide Ace, and who had also grown into a leader, for a Homerun Derby winner. That's like trading Kevin Durant for the winner of the slam dunk contest. And this happened because the Sox hardly tried to keep their Ace. That lack of effort is the most irritating aspect of what unfolded at the trade deadline.

The $70 million offer for 4 years offer was an insult, not a starting point. You can't negotiate with insults. Watch Shark Tank and see how the potential investors react when someone makes an absurd demand. Or go to a car dealership and offer to buy a brand new Mercedes for half the sticker price. The dealer won't make a counter offer, they'll just move on, because it's clear you're not serious.

I've heard some people question Lester's camp for not making a counter-offer, but how do you counter a joke? How can you negotiate with someone who thinks that you're worth slightly more money a year than Clay Buchholz was? How can you negotiate with someone who is clearly terrified of long-term commitment, which I'm sure is something Lester wants? Lester has been underpaid by the Sox for years, this is his chance to cash in, and the Sox were too cheap.

Or were they? Were they cheap or did they want to make a token offer they knew would get rejected? They've done similar things before.

These cloak and dagger, deceptive, disingenuous tactics are what we've come to expect from the Red Sox front office. And don't exclude Ben Cherington from these mind games. He's King John's pawn, he's Lord Lucchino's foot soldier. He's happy to be their puppet, or to stay out of baseball decisions when his masters get involved.

The Red Sox have no clue what it will cost to sign Lester in the off-season. They don't even know what his hometown discount rate might have been. That's the proof that their "negotiations" with him were not negotiations. If you don't at least come away with knowing what the other party wants, then you haven't negotiated.

If Lester signs a massive deal somewhere else, let's say $200 million for 7 years, I won't praise the Red Sox for knowing the price would be too high. They don't know anything. They made a crap offer that pissed off their Ace, then failed to immediately make a legit offer, then traded their best player from the 2013 World Series run. They sent a pitcher with 110 career wins, a 3-0 record in the World Series, and 2 rings to Oakland in exchange for a guy with 66 career homeruns and 2 HR Derby trophies.

If this had been the end of a hard fought negotiation, then it would be easier to accept. It's not, though.

5 years and $100 million, perhaps with a vesting option for a 6th year. Maybe 5 years at $110 million. That might have been enough to keep Lester. We simply do not know, though. We'll never know. Which is why this whole situation pisses me off so much.