The Army-Navy Game: the only thing about college football worthy of respect 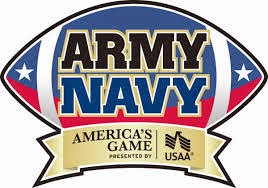 Army and Navy make respecting history a priority. Texas doesn't play Texas A+M anymore. Nebraska doesn't play Colorado or Oklahoma. The Notre Dame-Michigan rivalry is on hiatus, possibly returning in 2020. These historic rivalries are no more. Because of conference affiliations and money. History is a big part of college football, but respect for history is not a primary concern. It takes a backseat to revenue streams and endless conference realignments.

The student-athletes are student-athletes. The academies are tough schools to get into. And they don't make exceptions to those who are gifted on the field but can't do the work in the classroom. The US Military Academy and the Naval Academy are schools first, and the schools support football teams. Unlike the big college football programs like Alabama and Oregon, which are teams that carry the school.

There are more important things than football on the campuses at West Point and Annapolis. The same can't be said about Tuscaloosa or Eugene or Norman or Ann Arbor.

The money doesn't control the programs. There won't be a non-profit "charity" that buys Navy coach Ken Niumatalolo a $3.1 million house. He does make $1.6 million a year, but there are 60+ college coaches making more than him. Army coach Jeff Monken makes $700,000, 93rd in the country.

There is money involved in both programs and in the game. CBS pays to broadcast it. These teams will gladly go to bowl games when eligible. But the money isn't the driving force behind every decision, as it is with other programs.

The programs don't put winning ahead of following the rules. USC, Ohio State, North Carolina, Miami, Oregon, Cam Newton, Reggie Bush. Recruiting violations, players making money, all happens under the noses of blind athletic departments. Even holier than thou Notre Dame took part in Manti Te'o's lying about his sick girlfriend, after he and the school learned he'd been duped and she didn't exist.

Moral corruption is as necessary to a big time college football program as state of the art locker rooms and training facilities.

Finally, the biggest reason I don't respect big time college football but do respect the Army-Navy game is what happens after school. With the big time programs, even those who don't make the NFL have it made. A former Nebraska linebacker will get a cushy job at a car dealership in Lincoln because he had 100 tackles as a sophomore. Who cares if he doesn't meet his quota, he was the reason the Huskers beat CU (back when they played CU, now I guess Maryland would be Nebraska's rival?)

Meanwhile, an Army tackle will get a job commanding a platoon on a mountain in Afghanistan, a Navy cornerback will get a job as a Marine protecting an embassy in Iraq.

Cadets and Midshipmen face death, loss of limb, loss of peace of mind. Former Sooners and Tigers and Ducks and Wolverines face getting their drinks paid for by alumni and no student loan payments. They face NFL contract negotiations. They face reporters approaching them 5 years after they graduate, asking about the violations that were finally discovered at their schools.

Graduates (if they do actually graduate) of the big time programs live in a country made for them. While Army and Navy grads risk their lives to MAKE that country for all of us.