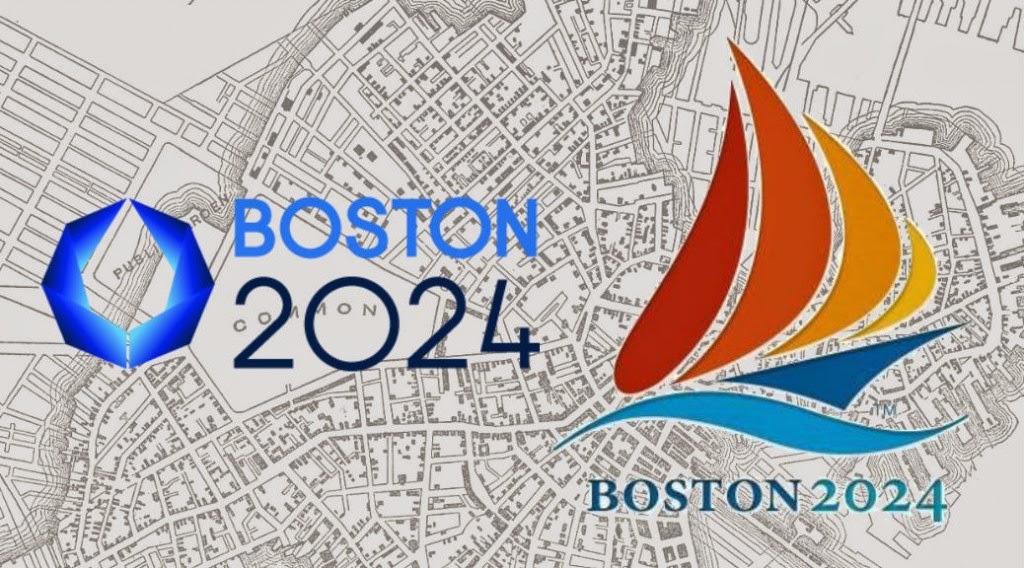 You know that excitement and anxiety you feel before a big winter storm hits? That's what I feel like thinking about the impending Boston Olympics. There's a Nor'easter coming, and it's forecast to slam Boston in summer 2024.

Sullivan's Tap near the Garden, with its long bar, could host the fencing. The Gold's Gym next to Fenway could host the weightlifting. The beach volleyball could be held in Revere. We could have diving off the Tobin. Cycling on Brookline Ave, during rush hour. The 100 meter dash at Park Street, running between the Red Line and the Green Line. Hurdles over the panhandlers in Harvard Square. The balance beam on top of the Citgo sign. Water polo on the Fenway concourse when it floods.

Do you watch the Summer Olympics? How much? All of it, or just some basketball, gymnastics, and of course beach volleyball? Well, Boston, prepare yourself to not only watch the games, but have all of them shoved in your face on a daily basis. You'll be drowning in the sweat of athletes. You'll have to be a judo blackbelt to fight the traffic. You'll have to be as flexible as a 75 pound Romanian gymnast to go through this ordeal without suffering a mental breakdown.

Boston's infrastructure can barely handle the strain of the daily commute. And it only takes one problem - such as a breakdown on 93, or a stopped train on the Red Line, or a fallen wire on the Commuter Rail tracks - for the whole house of cards to collapse.

Boston's bid for the 2024 Olympics hinges on public transportation to move spectators, officials, and participants around the city. There will be no centralized Olympic Park. Everything will be spread out, mostly at facilities attached to the city's universities. Fencing will be at MIT, field hockey at Harvard Stadium, rowing in Lowell. Yes, Lowell.

The innovative plan requires that large amounts of money are donated to schools for buildings that will be used for the Olympics, then become part of the university. UMass Boston, for instance, wants to build new dorms. These buildings could be used as an athletes' village before being converted for use by college freshman to pass out in after drinking 4 Smirnoff Ices.

It would be a reinvention of how the Olympics are played and paid for. Which scares the hell out of me. I love innovation, but figuring out new ways to do things means making mistakes. Mistakes cost money. The people who want the Olympics here can quote prices all they want. But we here in Boston know better than anyone that estimates mean nothing.

Seriously, how can you estimate an accurate cost for something that's never been done before?

When considering the Olympics, you shouldn't try to weigh costs vs. benefits. You need to look into who will profit, and who will pay. Weigh the takers vs. the payers. Suffolk and other contractors will profit. And I'm sure the unions doing the work won't ask for more money or anything. The people on these committees will all make a tidy salary. Cops will rack up the overtime with security details (you pay for that). Someone might get a new soccer stadium out of the deal. Hotels will clean up. Local businesses will make some money. There will be part-time work available for a short period. And the State government will be able to tax all of this (the construction, the wages made by workers and cops, hotel rooms, sales tax).

Just remember, every dollar made comes from somewhere.

Frankly, I'm not sure Boston could handle the strain on its infrastructure, even if it is improved. Imagine Marathon Monday, every day, for weeks. Now imagine you had to get to work on that day. Imagine you had to get from A to B, but on the way were the crowds from the archery and the high hurdles trying to get to their events.

What's the worst that could happen? An already antiquated and overused Green Line could break down, delaying events, making people late for work. Or worse, a train could derail. At the very least, public transportation will become a massive pain in the ass, as opposed to what you feel riding the T normally: numbness with the occasional acute flare up.

I'm not sure Bostonians want to deal with that. But if they do, then go for it. All I know is that if I'm living in Boston in 2024, then I'll rent my place during the Olympics and take a vacation.