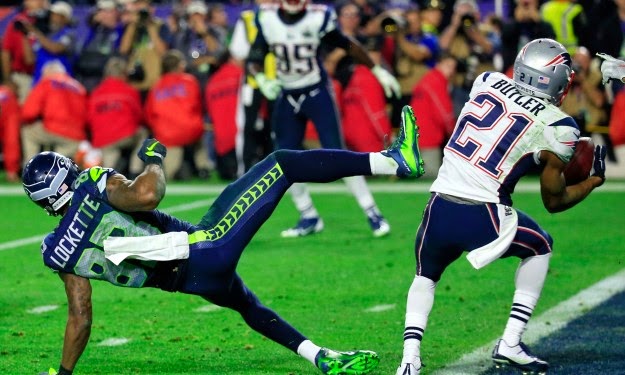 The Patriots won their fourth Super Bowl with one of the most exciting finishes to a sporting event I've ever seen. To go from feeling defeated and deflated (pun intended) as the Pats were about to lose another Super Bowl in heartbreaking fashion, to sheer elation as Malcolm Butler picked off Russell Wilson in the end zone, was a feeling I will never forget. I've never transitioned from sitting quietly to jumping up and down and screaming more quickly in my life. From despair to ecstasy in the span of a heartbeat.

We're on to the duckboats!

Tom Brady was named Super Bowl MVP for the third time. Many have argued that Julian Edelman should have won, but Brady's performance was much more critical than anyone else's. Especially since the Pats struggled to run the ball (21 of the team's 22 first downs were in the air). The 2 interceptions were his fault, but they also showed how much the game turned on every decision he made. Brady had to be great for the Pats to win, and he was.

Despite the picks, Brady had an MVP caliber night. He threw 4 TDs and for 300+ yards against the Legion of Boom. In the 4th quarter he orchestrated back-to-back touchdown drives. He was 13 of 15 in the 4th for 124 yards and a 140.7 passer rating. And on the game-winning drive he was 8 for 8 for 65 yards. When his team needed greatness, Brady delivered.

This was the most clutch performance of Tom Brady's career, and that's saying something.

An undrafted corner out of a D-2 school makes a play that wins the game, so that the QB taken in the 6th round can win the MVP, while many argue that a 7th round receiver should have won it. That's how the Patriots do things.

All of the Patriots players showed up with good and great games. Julian Edelman with his 9 catches, 109 tough yards, and a score. Rob Gronkowski with 68 yards and a TD. Danny Amendola fought for all 48 of his yards, and also scored. Brandon LaFell with a touchdown as well. Shane Vereen caught 11 passes (the Seahawks as a team caught 12). And the much doubted offensive line protected Brady.

The defense almost blew it in the end. Another freak catch in the Arizona desert. But Malcolm Butler saved the day.

It was an awful play call by Seahawks offensive coordinator Darrell Bevil. And Pete Carroll should have vetoed it. It was also a poor pass by Russell Wilson. All that being said, Malcolm Butler made one hell of a play. He saw the receivers setting up the pick, he attacked the ball, he beat his man to the spot and won position, then he held on to the ball.

Can you imagine Game 7 of the World Series, bottom of the 9th, down by 3 runs, and a rookie hits a Grand Slam? Because that's what Malcolm Butler did.

Love or hate the Patriots, you have to admit that when the Pats are in the Super Bowl you'll be entertained. All 6 of their Super Bowls with Brady and Belichick have been instant classics. This one might be the best.

I remember about 10 years ago Tom Brady was asked which one of his Super Bowl wins was his favorite. His answer was "The next one." He and the Patriots have finally won that next one.