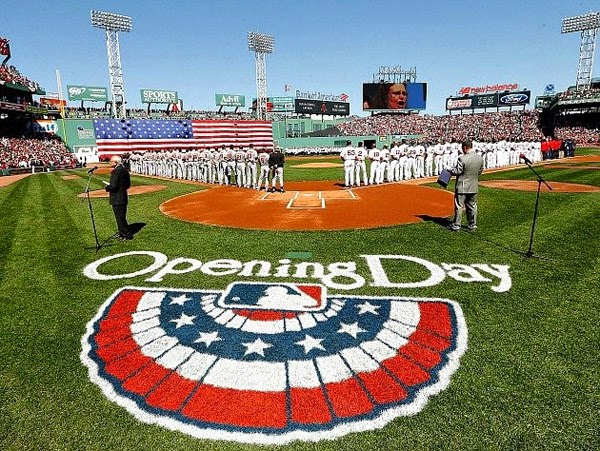 I'm a little sick of hearing how Opening Day is a day for optimism and not a day to allow yourself to be pissed that Clay Buchholz is your "Ace." This team finished in last place, then lost its best player at the most important position. So let's be optimistic, but also realistic.

And if you truly are optimistic that the Red Sox are within arm's reach of another World Series, then you should be angrier than I am that the Sox didn't employ the left arm of Jon Lester to reach for that ring.

I'm sick of long pointless summers of Red Sox baseball. I'm sick of games played poorly by overrated prospects. Only 2 AL teams were struck out more often than the Red Sox (1,337 times). I'm sick of that. I just want to once again feel like these games mean something. I want to watch players who can play. All I want from the 2015 Red Sox is to not suck. Be a legitimate, watchable, respectable team.

I don't think I'm asking for much. I don't mind a "bridge season," so long as the bridge isn't as painful to cross as the Bourne Bridge with one lane open the Friday before Memorial Day. The not-optimistic reality is that 2015 will be a bridge season.

The rotation has tremendous depth in the middle, with five strong candidates to fill the #3 slot. That's as optimistic as I can phrase my assessment of the pitchers.

I don't know why everyone thinks the lineup is amazing. Probably because last year's was so terrible. The offense will be good, but I'm not sold on it being as great as everyone thinks it will be. If Dustin Pedroia doesn't improve, that's a problem. Mookie Betts has fewer than 200 MLB at-bats, so how can we be sure what he'll do in the next 600 ABs? Pablo Sandoval's regular season production isn't great, he hasn't slugged above .450 or hit 20 HRs since 2011. Shane Victorino is your starting right-fielder, 'nuf said about that.

David Ortiz is 39. His average, OBP, and SLG have all decreased in each of the last 3 seasons. He hit 35 homeruns last year, and maybe he'll hit 35 more, and maybe all his offensive numbers will rebound. But he's also 39. At that age, the "no" side of maybe gets larger and the "yes" side gets smaller. I'm not being a Debbie Downer, I'm being a Pragmatic Pete and a Factual Frank. The core of the lineup is 39 years old. It's a fact. On May 19th, he'll be closer to his 40th birthday than his 39th.

It's a good lineup. It will be less painful to watch than the 2014 Sox. But it won't be the Murderer's Row that some in this town seem to think it will be.

Then there's the bullpen. The most positive thing I can say about them is that I have no idea what they'll do.

I'm not trying to be pessimistic on Opening Day. It's sunny out, the snow is almost all melted away, I'm excited for the game, and I haven't been excited to see this team play in over a year. The Sox have a team that can be entertaining and relevant. And I think I'm going to enjoy the 2015 season because my expectations and hopes are rational. I won't be disappointed when this team finishes 3rd, or loses the Wild Card playoff game because it has no Ace. And if the Sox pull off a miracle, I'll be just as happy as the rest of you.