When Tom Brady's punishment for DeflateGate was announced, I laughed hysterically 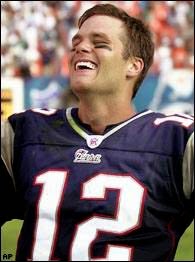 My friend Mike called me at 5:39 p.m. and asked me "What the hell is going on in this world?" It took me a few seconds to realize he was talking about DeflateGate. Then he told me the punishment the NFL announced it would levy on Tom Brady and the Patriots:

Upon hearing this news, I laughed. Hysterically. This is one of the silliest things I've ever heard.

The 4th round pick is the cherry on top. I can imagine Roger Goodell and NFL execs discussing the punishment in a board room somewhere. "Okay, so we have a suspension for a quarter of the season, a million dollar fine, and a first round pick... Still seems a little light... How 'bout we toss a 4th round pick on top? There we go. That works."

I honestly can't get outraged over this. Not yet. Maybe I will when the season starts and the Steelers are able to get a BS win because they're going against Jimmy Garoppolo. Maybe I'll be angry if the Pats miss out on the playoffs or a bye because of a loss in those 4 games. We'll see. Then again, if the Pats go 4-0 during this suspension, I'll laugh even harder.

The lack of proven connection to Brady, the inconsistencies and questions that the Wells Report didn't address, the fact that the same report disagreed with referee Walt Anderson about which pressure gauge he used, so on and so on. I can't marry the flimsiness of the evidence with the brutality of the punishments.

And ultimately, the Patriots are 4 time Super Champions. Even with this suspension they're still contenders for another title. It's a harsh punishment, but the lasting effect might not be as painful as it seems. It's a silly punishment, but these are silly people, playing God in their silly world.

And the final punchline of this joke: Tom Brady's first game back would be against the Colts in Indy. Think he'll be pumped for that?