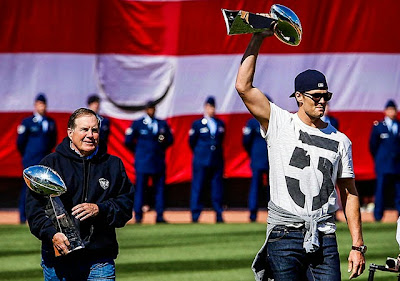 There's a factory in Foxborough, Mass. that takes the raw material of adversity and somehow turns it into wins. A few months ago the workers there turned an overblown story about under-inflated footballs into a shiny silver trophy. Several years ago they turned an uproar over videotaping signals which were visible to tens of thousands of people, into a nearly perfect season. The year after that, they went 11-5 despite losing their All-Pro quarterback. And a few years before that, a team that lost 31-0 to the Bills went on to win 21 games and 2 Super Bowls in a row.

The team most likely to succeed in adverse situations is the New England Patriots. They've gone through more -gates than a flight attendant. They survived the Aaron Hernandez arrest. They endured the hype around Tim Tebow.

Tom Brady will miss up to the first 4 games of the regular season. Those are against the Steelers, Jaguars, Bills, and Cowboys. Two good teams, another that always plays the Patriots tough, and the Jaguars. Fortunately, only one game is against a divisional opponent, and only one game is against another contending AFC team. Unless Goodell suspends Brady for appealing his suspension (he already suspended him for not submitting his cell phone, so don't dismiss it), Brady should return to play the Colts on an extra-dramatic Sunday Night Football, then the Jets and Dolphins.

Obviously without Tom Brady those first 4 games will be tough. This team might find itself 1-3 or even 0-4 to start the season.

Then again, it's plausible (or shall I say "more probable than not") that the Patriots can manage to go 2-2 in those games. Going 3-1 is within the realm of possibilities. And although it's unlikely, a 4-0 start isn't out of the question.

So the Patriots could start the season 2-2, and then get even better by adding Tom Brady to their active roster. This team started the 2014 season 2-2. We all remember "We're on to Cincinnati." The Pats then won 13 of the next 15 games, and the Super Bowl.

So as far as the impact of this suspension goes, I don't think it's incredibly severe. And considering how the Patriots rally when they perceive the world to be against them, I think they are now more likely to win the Super Bowl then they had been before Goodell threw the book at Brady.

And if the Patriots do win the Super Bowl in a few months... I don't think I'll ever stop laughing.