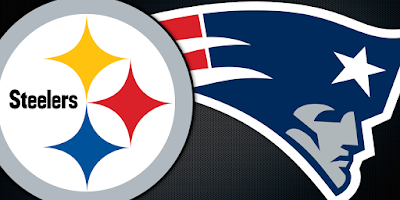 Patriots vs. Steelers. Tom Brady vs. Big Ben. Bill Belichick vs. Mike Tomlin. SpyGate and DeflateGate vs. a coach trying to block a kick returner on the field. Two teams, lots of recent success, lots of rivalry, lots of respect, and lots of shared hatred for Roger Goodell.

Get ready to share your drunken thoughts on SpapFace and InstaChat, because it's the motherfucking AFC Championship.

Belichick says that players play, and coaches coach. And we say that drinkers drink. So here's a drinking game to play during the AFC Championship:

Highlights of Patriots beating the Steelers = drink for the duration of the highlight (bonus points/bonus drinking below)
-Clip of Bledsoe throwing a TD = drink for 11 seconds
-Troy Brown punt return TD = drink for 80 seconds
-Rodney Harrison INT return TD = drink for 37 seconds
-If you're the first to spot Corey Dillon, Deion Branch, Ted Johnson, or David Givens, you can distribute drinks to everyone else until the end of the quarter

You think Ben Roethlisberger is sacked, but he escapes = 1 shot
Antonio Brown touches the ball = drink until he's tackled
Brown is just too fast to be covered/tackled = 1 drink
Le'Veon Bell hesitates = pause, then drink, but the last one to drink after pausing has to finish their beer

A kicker misses a kick = 1 drink for PATs, 3 for FGs
A team goes no huddle = 1 drink per snap
Kickoff or punt return = drink during entire return
Touchback = 1 drink


So enjoy the game. Get lubed up. Don't drink and drive. In fact, don't play this game at all because it will kill you.