Ray Lewis calls out Tom Brady's toughness, even though Brady played with no fear against murderer Ray Lewis 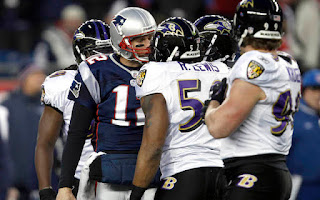 In Saturday night's Patriots-Texans game, Jadeveon Clowney was not penalized for what seemed to be a late hit on Pats' QB Tom Brady. Clowney began the tackle shortly after Brady released the football, but probably should have been called for roughing the passer as the tackle extended long after the ball was out, with Clowney eventually dragging Brady to the ground.

Brady made little effort to hide his feelings, yelling at the refs with such anger that he fell to the ground again.

And maybe the forceful lobbying worked, as later a roughing call was finally called on Clowney. Be that as it may, Brady has a well-deserved reputation as someone who gets angry about calls and non-calls failing to go his way. He's seen as a complainer, because that's what he does to refs on the field.

What baffles me most of all is that by yelling and complaining, it somehow makes him less tough. He's seen as a whiner and a baby. Ray Lewis, for example, Tweeted this last night.

As if Brady doesn't know what football is, what the game entails, and that hard contact is part of the game.

It's funny for Ray Lewis to call out a player for lack of toughness, when on the football field Brady has been fearless, even when facing people who have participated in murder. Such as Ray Lewis.

If you don't like the complaining to refs, fine. That's kind of silly because NFL officiating is horribly inconsistent and overly obsessed with defining things that can't be defined while simultaneously ignoring the spirit and intention of the rules.

But Brady's complaining has nothing to do with toughness or lack thereof.