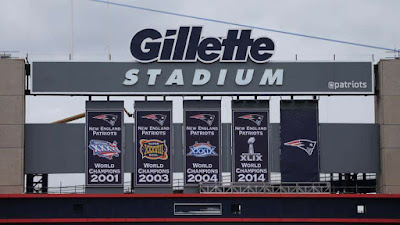 Football season is back and it begins as it should: with the Patriots raising a championship banner. This one made even sweeter by the failed attempts of the NFL and Commissioner Roger Goodell to punish the Pats for not kneeling to him and kissing his ass.

The Patriots begin their title defense against the Chiefs, and hope to become the first back-to-back champions since themselves back in 2003 and 2004. The team is loaded with talent but it's all about execution. Having talent is like stocking your fridge and liquor cabinet with great booze. Assembling it is the first step, but knowing what to do with it is far more important.

We're happy to help guide you to drinking your way through the 2017 season. And we begin with a drinking game to play as the Pats host the Chiefs, hoist a banner, and you destroy your internal organs and your life with toxic levels of alcohol.

Here are the rules...


Any time this is on screen:
The score 28-3: drink for 25 seconds
A banner = 1 drink per banner
A Lombardi Trophy = 1 drink per trophy
A Super Bowl ring = 1 drink per ring
Roger Goodell = finish your beer

Injured Spencer Ware = 1 drink
Injured Julian Edelman = finish your beer, toss it in the air, and whoever makes the most ridiculous catch get 1,000 points
Video of Ware and/or Edelman getting hurt = drink during entire clip

Any time this happens:
Andy Reid mismanages the clock = finish your beer


So enjoy the game between the Patriots and Chiefs. And if you play this game, please also enjoy the trip to the hospital, the morgue, and the cemetery.