Which Patriots team is the real one: Week 1 or Week 2? 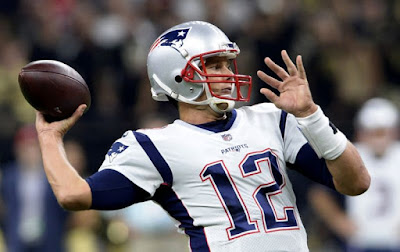 The Patriots looked like two different teams between Week 1 and Week 2. What changed, is the change sustainable, and which performance reflects who the Patriots really are?

1. The Chiefs are much better than the Saints
Kansas City won 42 games the past three seasons, the Saints have won 21. The Saints have some talented players, but also have inexperienced and exploitable guys, especially on defense. And Brady exploited the hell out of them. A win is a win is a win, but let's not get too hard about beating a team that hasn't finished above .500 since 2013.

2. Brady was at his Bradyest
Even against a mediocre team, you still need to make the plays to win, and Brady did that to near perfection, especially in the 1st quarter. He was poised in the pocket, read the Saints' defense well, and made all the throws. Frankly, he sucked in the Kansas City game, and at times seemed to feel ghosts around him in the pocket. He was the most improved player from Week 1 to Week 2.

The subpar Brady we saw in Week 1 has made maybe 10 career appearances. The near perfect Brady from Week 2 has made about 40 appearances. The other 220 games have seen Brady be nearly this great or at least very good. So that's what we should expect to see week to week. He won't be as amazing as he was for the first 15 minutes, but he'll be closer to that than to what he did against KC.

3. Extra days and no days off
The Pats try to be the best practice team in the NFL. And that's why they win. Give them a few days extra to work and it typically shows on the field. Unfortunately it's rare to have a long week without also having a short week before it, so this advantage can't be exploited much.

4. Pats play better in adversity than perfect conditions
The Patriots play better in difficult circumstances than any team in the NFL. Whether it's injury, false media leaks about air pressure, a teammate being arrested for murder, Tim Tebow, the Pats thrive when the shit hits the fan and outside distractions threaten to undermine them. They have a sharper edge when working through adversity. So maybe a handful of injuries can actually help the team in some weird way? Maybe not.

5. Gronk looked 100% for 60% of the game
Gronkowski was flaccid in Week 1, he looked fiercer in Week 2, until he got hurt. When healthy the Brady-Gronk combo might be the most dangerous passer-catcher duo in the history of the game. He's also one of the best blocking tight ends in the League. With the injuries at WR, his health is something the Pats' season will swing on, and that's a flimsy backbone to lean on.

The Saints are mediocre, but so is most of the NFL. The Patriots showed in Week 2 that they should have regular season success against most NFL teams, so long as they have a minimum number of players they can put on the field. It was a good rebound, and it was great to see everyone step up any way they could: 7 players rushed the ball, 9 caught passes, 11 touched the ball, 20 of Brady's 30 completions were to non-WRs.

But as far as gauging the Pats as a contender, I need to see much more, either consistently against mediocre teams, or once against a good team.

I'm not trying to be a Debbie Downer, just a Rational Rob.