Gronk should have been tossed from Bills game, would have avoided suspension 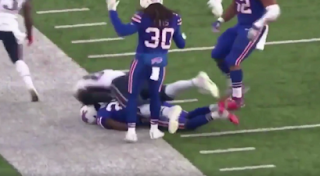 Gronk should have been ejected from the Bills game for his late, and dangerous hit on Tre'Davious White. Sorry, Pats fans, it's true. If any Bill or Dolphin or Jet did what Gronk did to a Pats' player, we'd all be up in arms about it. We all yell and scream quite vociferously when Gronk or Brady is a victim of a cheap shot. You can't then ignore your own players crossing the line so blatantly.

Even Belichick thought it was a "bullshit" hit.

It was moronic. No matter what you think about fines or suspensions, it was flat out stupid. As if nobody was watching. As if nobody would see a 6' 7" silverback gorilla acting like Razor Ramon on the sidelines.

But if the refs had kicked him out, it would be hard for the NFL to suspend Gronk on top of the ejection. It was a 20 point game with under 5 minutes, the result long since decided, so Gronk being tossed would have little impact on the game.

And honestly, it's Week 14 now, the Pats are on the verge of wrapping up the division, I don't mind the most injury prone TE in history missing a game. Suspend away.