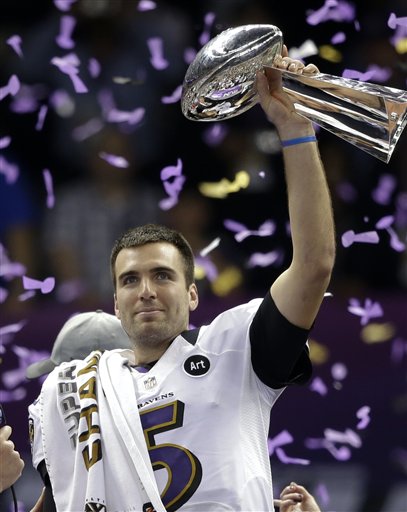 I found myself confused at the end of this game. Initially, I wanted the 49ers won win, because I didn't want Ray Lewis or Joe Flacco to achieve any further glory. But then, as the 49ers played the first half from a Foxhole, I lost all respect for them. So I was forced to choose between a team I didn't like, and a team I didn't respect.

The Ravens won, and they deserved it. It's remarkable how one brother could be so much more aggressive than the other. Sigmund Freud would have a field day.

Imagine what would happen if Anquan Boldin were on the Patriots roster. How much would Brady rely on him? How many receptions, how many TDs would he haul in? The Patriots could really use a large WR that can win battles in difficult situations.

Baltimore deserved this. As much as we can mock Ray Lewis for consuming deer antler velvet like some drunken and lonely Mainer, just about everyone in the NFL is on PEDs. So let he who supports a team without sin cast the first stone.

The Ravens played a game of football. The 49ers tried to play the Super Bowl. And in doing so they failed. The 49ers were conservative, tight, nervous, locked-up, not aggressive. They dug their foxholes from kickoff to the final whistle. And that's why they lost. The Ravens played football, and played it well.