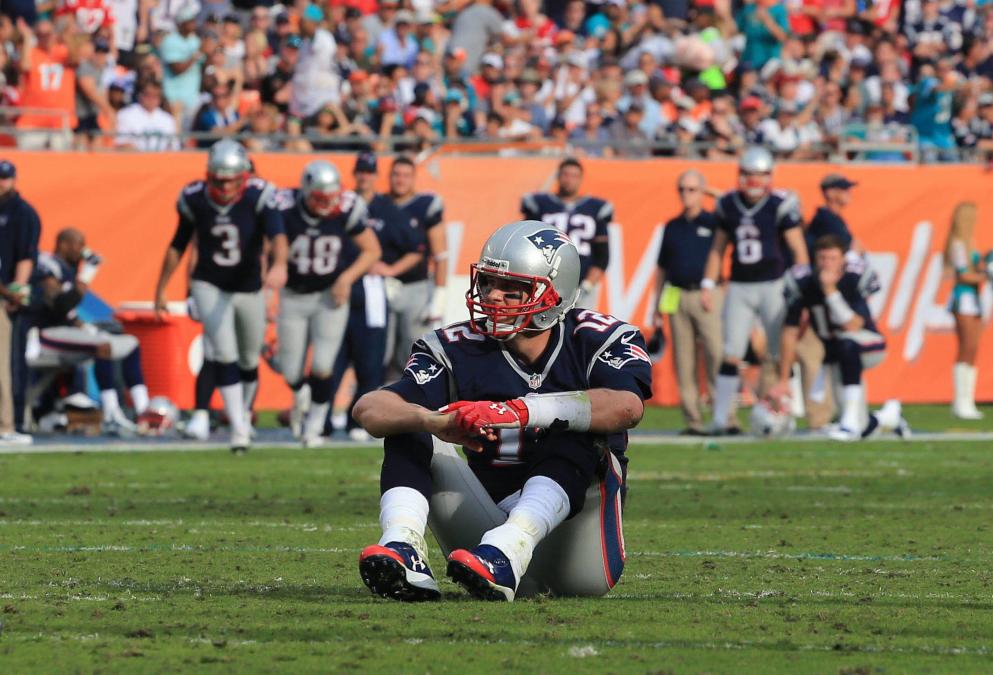 They didn't win because they failed to finish drives. Offensively and defensively. They didn't do well enough in the Red Zone on offense, and on defense they failed to get off the field in pivotal 3rd and 4th down situations. This game turned on 3 or 4 plays.

The Patriots' first drive went for 83 yards and ended in a Red Zone field goal. By the end of the 2nd quarter they were finally able to put together a touchdown drive. However the defense failed to stop Miami on a 3rd and 10 with 1:23 left before halftime. a stop there and maybe Brady and the offense have a chance to score. However the defense failed to get the ball back. Then failed to stop Miami.

The Patriots defense failed to finish the drive on 3rd and long. Miami scored and kept themselves in it. Instead of going into halftime up 14-0 or 10-0, it was 10-7, and the Dolphins had hope.

In the 4th quarter the Patriots had three drives totaling 220 yards. And only one drive ended with a touchdown. Without Rob Gronkowski the Pats will struggle to score in the air in the Red Zone. And they didn't even try to score on the ground.

If you look at the raw numbers, the Patriots theoretically should have won. They accumulated more yardage, won the time of possession battle, committed fewer penalties, were better on 3rd down, rushed more per carry, allowed fewer sacks, turnovers were even. The difference was a handful of plays at key moments: Not stopping Miami on 3rd and 10 before halftime, or on 4th and 5 in the 4th quarter. Kicking Red Zone field goals instead of scoring touchdowns.

One strategic issue I had with the Patriots in the 4th quarter was just after they'd achieved a 1st down at the Miami 19 with 0:27 on the clock. The Pats took a timeout. I would have spiked the ball at that moment and saved the timeout. That would have kept the playbook open and forced Miami to defend the middle of the field, not just the edges. Once the Patriots took that timeout, all Miami had to defend was the space outside the numbers and in the end zone. And that put the Patriots receivers in position to have one-on-one physical battles, which the Patriots are not equipped to do without Gronk or big receivers. Edelman and Amendola, as brilliant as they are, are not going to outmuscle safeties and linebackers in the Red Zone.

Also the ball was still 19 yards away from the goal line. Keep the timeout and you can try to close the distance to 10 yards in the middle of the field. Guys like Edelman and Amendola are best when they have the option to dart inside and outside. They're at a disadvantage if they're forced to play on the edges and not use their shiftiness.

I'm not going to panic and go to DefCon 2 over this loss. The Patriots failed to win. The world somehow continues to spin. No other AFC team is significantly better than the Pats. The Broncos can't beat the Chargers at home. The Bengals were thrashed by the Steelers, who were dominated by the Patriots, who lost to the Bengals (the common denominator in all three of those games is that the home team won). I see little to no separation among the best AFC teams, and see that a handful of plays is the difference between winning and losing.

The Pats are beat up and injured, but they've won 10 games. They were 1 play from winning this game. I'm not too concerned. They have issues and weaknesses. Just like all the other teams out there.

Patriots play the Ravens in Baltimore Sunday evening. As well as Baltimore has been playing, they have weaknesses too. But I'm sure all week people will focus on the weaknesses the Patriots have.