Keep Calm and Brady On: Patriots fans need to mellow out and enjoy this roller coaster season 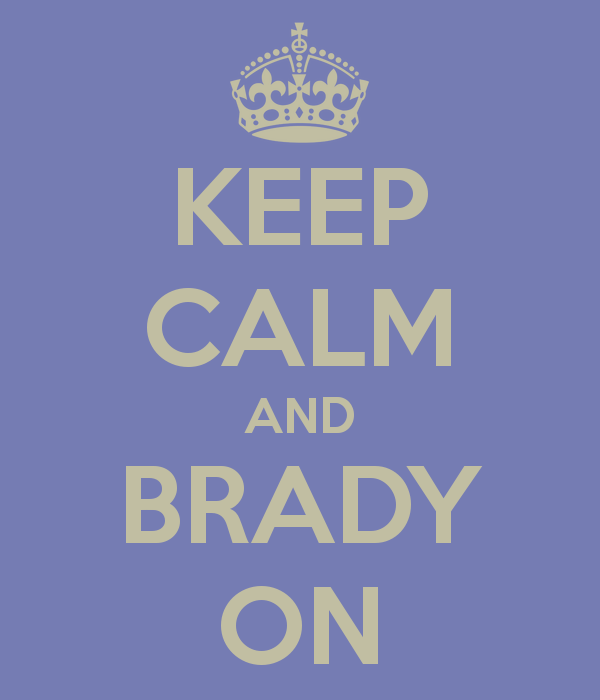 I can't take credit for the slogan "Keep Calm and Brady On," but then again all of those "Keep Calm and..." shirts and posters you see out there are fairly unoriginal, so even the people who came up with them aren't very creative.

And with the right attitude, inconsistency becomes drama. It becomes something that can be enjoyed as entertainment.

But Pats fans seem so joyless. Even when the team wins, unless it's a flawless victory, the fans worry and fret, troubling themselves Monday through Saturday. They then spend their Sunday (or Monday night) yelling at the TV. That's no way to go through life.

Pats fans need to have more emotional maturity about this team. As do pundits and writers and sports radio morons. I was expecting the radio yesterday to be full of cautious optimism. "This was a great game, but it's just one game," type of sentiments. Instead everyone was either drooling over this game, or they were being defensive about their histrionics from the previous week, which they spent dismantling the Patriots and speculating that Brady would be benched because Belichick had "Lost the quarterback."

People in the media rallied around Trent Green, who berated the Patriots for not spending money (a just criticism, but Trent didn't do much criticizing of his Baltimore Ravens for how they handled the Ray Rice situation, in fact Trent praised them_.

The truth lies somewhere between the "Brady and Belichick are at war" camp, and those who think that "everything is awesome."

The truth is that this team is good but flawed. This team has talent and holes. They're entertaining to watch, if you let yourself be entertained.

There's at least a sliver of hope for this team. It's not a big sliver. They have many issues, and they match up poorly against a number of teams. There are greater tragedies in life than seeing your favorite football team win ONLY 3 championships.

The hope, and the entertainment value that Pats fans are choosing not to enjoy, are the envy of a number of NFL cities. I'm not saying you should be satisfied with losing. I am saying you should at least enjoy exciting football games.

And if you can't find a way to enjoy watching a team that has a chance to win, a team that can make exciting plays, a team that plays dramatic games. Then I don't know why you watch sports.