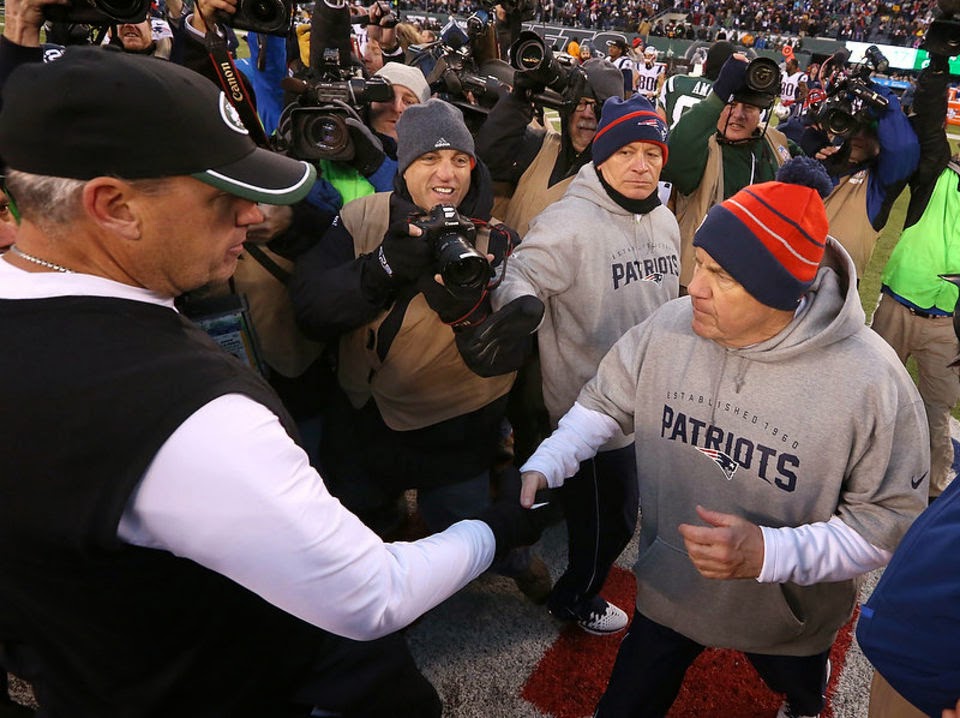 Ugly wins are wins. This was just about as ugly as you could get. No protection for Brady, who\ made a very poor decision and threw a pick. Inconsistent pressure on Geno Smith. Stupid penalties. No offensive movement for most of the game. Ugly, ugly, ugly. But a win, win, win.

And by winning the Patriots advance to the Divisional Round of the playoffs, with a chance to clinch the #1 seed pending the Broncos/Bengals game.

As unattractive as this game was for the Patriots, some big plays gave it a good personality. The Pats rarely pressured Smith, but when they did they forced an interception, and sacked him twice on big third down plays when the Jets were threatening to score. One sack pushed the Jets back 10 yards before they attempted a 52-yard field goal. That field goal was tipped by Vince Wilfork, and the Patriots kept the lead.

Special teams once again factored into a victory, both the blocked field goal and a 39-yard punt return by Danny Amendola at the start of the 2nd quarter that eventually led to Gronkowski's touchdown.

Speaking of Amendola, this was by far his best performance of the year. Brady targeted him 11 times and he caught 8 passes, both team highs, for 63 yards. He had 8 catches in his previous 6 games combined, and only 68 yards. A third of his production this season came Sunday afternoon.

When he got hurt last year and Edelman stepped in and excelled, Amendola found himself without a role in this offense. That's not an excuse, because it speaks to a lack of versatility on Amendola's part, as well as his difficulty staying healthy. Nevertheless, it's unfair to just dismiss him as a complete failure, because if not for Edelman being a great slot receiver, Amendola would have been a good one. When charged with that task, he's done well.

One thing that this game made clear is that the running backs will only do as well as the offensive line does. All the clamoring for Jonas Gray to get carries, all the lobbying made by fans and pundits to run the ball more, it's based on how well the line has played, not how good the RBs are. Jonas Gray had a great game against Indy. But he did it behind an offensive line having an even better game. On Sunday the line struggled, and so did the RBs.

And that point also should make your o-line concerns more prominent. It's the biggest worry this team has going into the playoffs. Brady can't pass without protection. Blount, Gray, and Vereen can't run without holes. This team can't move the ball if the line can't win battles in the trenches.

Concerns aside, the Patriots won the bye, and can clinch home-field advantage if Cincinnati beats Denver Monday night. When the Patriots squeezed by the Jets 27-25 in October, and were about to play a bunch of games against tough teams, did you imagine that they'd be on the verge of clinching the #1 seed?