DeflateGate of the Union 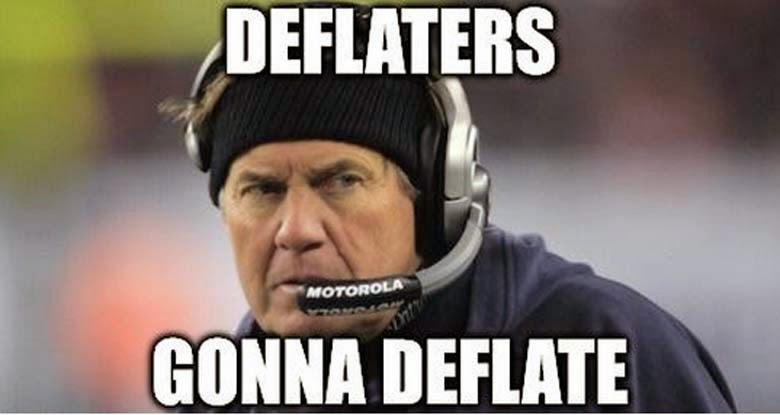 The Patriots played with deflated footballs on Sunday. Reports are coming out that 11 of the 12 balls on the Pats' sideline were under-deflated, by about 2 pounds of pressure. Sidebar: people really need to know the difference between pounds per square inch, and pounds as a unit of mass/weight.

I don't respect these actions. Nor do I disrespect them. I don't like that the Patriots did this, but I don't dislike them for doing it. Bill Belichick is still my second favorite sports figure of all-time (behind Pedro Martinez). Although as much as I like him, if I were playing poker with him, I'd cut the deck when he dealt.

You know, on more than one occasion I've broken the speed limit. I've been caught doing it a few times too. I paid my fines and saw my insurance premiums go up. When I was 17 I even got my license suspended because I got 2 tickets before turning 18. I also drank alcohol before I turned 21. I've never cheated on a girl, but I have been with girls who were cheating on their boyfriends.

What's that? You don't care? I understand. I don't really care about the Patriots deflating their balls. They cheated, they got caught, they'll have to pay for it. It's similar to the fines I paid for speeding. Or when a player jumps offside, they pay for it with a 5 yard penalty. Or if a player tests positive for amphetamines, they get suspended.

What's the appropriate punishment here? The NFL's rules prescribe a minimum of a $25,000 fine. That's just the minimum punishment. What about draft picks or suspensions?

I think suspending Belichick or Brady would be absurd. And yes, Brady is part of this. You can't just blame Belichick here. I think a hefty fine, and a loss of draft picks would be suitable punishment, and act as a deterrent to other teams. Because other teams do this. Which doesn't justify doing this, and doesn't mean anyone caught doesn't deserve punishment. But the notion that the Patriots have committed a unique crime is preposterous.

Does this tarnish Bill Belichick's legacy, or the Patriots'? In the eyes of people who already see it as tarnished, it does. However, the asterisk crowd was always going to find a way to diminish what Belichick and the Patriots have done the last 15 years.

In my eyes there is no tarnish, at least not to any part of the coach or the team that matters to me. Belichick's adherence to the rules was never a factor in me liking him. He is the best coach of the era and one of the best of all time. He pushes the rules and sometimes breaks them. He does everything it takes to win, which is a respectable philosophy that sometimes results in behavior that isn't respectable.

His job is to win. And the Patriots better win this upcoming Super Bowl. Because nothing is sadder than cheating and still losing.