Patriots' Path to the Super Bowl 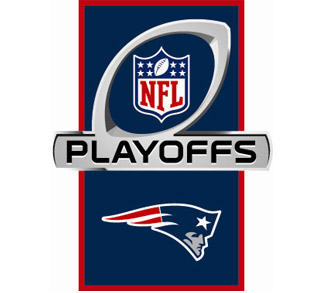 The Patriots secured the top seed in the AFC playoffs Sunday, ensuring that the road to the Super Bowl goes through New England. But what kind of obstacles will the Patriots face on that road? Who will stand in their path and what kind of challenge will they pose?

Just a sidenote about this year's NFL playoffs... between the Pats, Steelers, Chiefs, Raiders, and Dolphins, you've got tons of great AFC/AFL/NFL history. These teams combine for 16 total Super Bowl wins, or 2/3 of the 24 Super Bowls won by AFC teams. The Steelers, Patriots, Dolphins, and Raiders have won more AFC Championship games (25) than all other teams combined. Think about all the great players, coaches, and teams: the Steel Curtain, the perfect 1972 season, the Black Hole, the loudest stadium, Brady, Bradshaw, Stram, Madden, Marino.

Plus there's the Texans.

Here is a list of what the Patriots will face in each round:

DIVISIONAL ROUND OPPONENTS: Oakland, Houston, or Miami
The Patriots cannot face the #2 seeded Chiefs or #3 seeded Steelers in the Divisional Round, which is good news because these are the two teams I'd least prefer the Patriots to play. If the Raiders still had a healthy Derek Carr I'd include them in that group. But they don't.

So let's start with the Carr-less Raiders. They had a great offense with Carr. They still have plenty of talent on that side of the ball, but in a playoff game against Belichick and the rested Patriots, it's hard to imagine the Raiders posing much of a threat. You never know, though. Over-confidence can be a killer. And if the Raiders make it to the Divisional Round, that means they figured out a way to win, and did so on the road. Albeit against a soft Houston team. But momentum, confidence, and a backup QB with little game film of to study... you just never know.

You would hope the Pats would take the game 100% seriously and do their job.

If it's Patriots vs. Raiders in the Divisional Round, how many times will the phrase "Tuck Rule" be uttered before and during the game? Over/under on that would be 1,000,000.5. 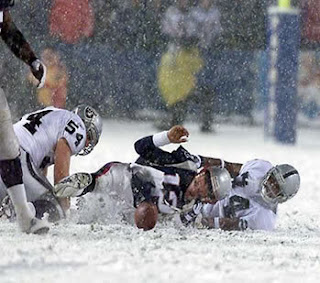 I don't know which team I'd prefer the Patriots to play: Houston or Oakland. There's a strong chance it will be one of these two as I think the Steelers will easily handle the Dolphins. So do you want the team with an injured QB, or the team with the mediocre QB?

The 9-7 Texans were 4-6 outside of their crappy division. One of those losses was a 27-0 blowout at Gillette Stadium against Jacoby Brissett. 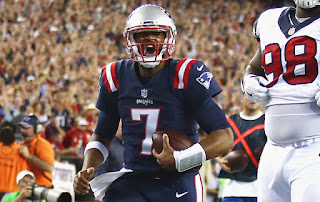 Houston averages under 200 yards in the air per game. For every position they're strong at, there are others that they are terribly weak at, quarterback being the most obvious.

The last (and only) time the Texans beat the Patriots was in January 2010. That was the game Wes Welker got hurt in before the playoffs started. The Patriots are 7-1 against Houston all-time, and are in the midst of a 5-game win streak against them.

You can't not be happy if the Pats play the Texans.

If Miami beats the Steelers, then the Patriots play the Dolphins no matter what happens in the 4 vs. 5 game. Miami can sometimes give the Pats trouble, but not so much at Gillette Stadium in the Brady Era. The last time the Dolphins won in Foxboro was in 2008, when Matt Cassel was the Pats' QB. Brady has beaten Miami 10-straight times at Gillette, and is 14-1 against them at home. 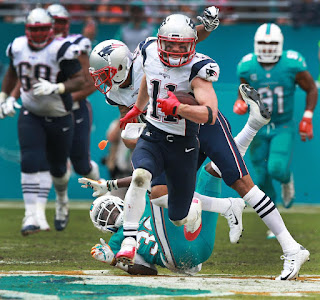 But there's something unsettling about playing a team for the third time in a season. Those games can get weird. The Dolphins have seen (twice) how the Patriots can beat them. They can learn and possibly adapt. Third games can be unpredictable, which seems counter-intuitive considering there's already 120 minutes of football played between the two teams.

Over-familiarity and maybe over-confidence can be a recipe for a disappointing loss. And after all, the Pats' win in Miami this past Sunday was a few turnovers away from being very, very interesting. One or two big plays can turn an easy game into a tough challenge.

All 3 of the potential Divisional Round opponents are excellent matchups for the Patriots. There's no top tier QB to worry about. These are teams with multiple and significant flaws. The Raiders and Dolphins have limited playoff experience and the Texans only have playoff losing experience.

So the Divisional Round might be easy on paper. That is certainly not the case for potential AFC title game opponents...

AFC CHAMPIONSHIP GAME OPPONENTS: Steelers, Chiefs, Raiders, or Texans
The Patriots can't play the Dolphins in this round. It seems unlikely that the Raiders or Texans would get this far, but it's possible, and would be fantastic for the Pats.

What's most likely is that either the Steelers or Chiefs would come to Gillette Stadium.

I think the Steelers will be the team to challenge the Pats for a Super Bowl berth. They have the momentum, riding a 7-game winning streak entering the playoffs. They have the history and experience. They have a Super Bowl winning QB, a receiver who is almost impossible to cover, and one of the best RBs in the NFL. 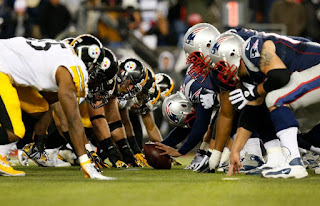 It's true the Pats beat Pittsburgh on the road in October. And that means a whole lot of nothing. The Steelers were banged up and without Roethlisberger. Meanwhile Rob Gronkowski was healthy. The tables have turned since then. The Steelers have the all their black and yellow Killer Bees at their disposal now: Brown, Bell, and Big Ben.

Their defense isn't as imposing as it used to be. They were 12th in overall defense, 16th in passing defense, 13th in rushing. They were 10th in points allowed. None of this is bad, but it's not what one usually thinks of when one thinks of Pittsburgh.

So maybe the Chiefs will beat them in Kansas City.

The Chiefs led the NFL with a +16 turnover margin. They protect the ball, and they go after it on defense. Most interceptions, most fumble recoveries.

They don't have a very good offense. And their Red Zone offense isn't impressive so even against the Patriots bend-don't-break defense it will be tough for KC to put up points. Andy Reid is also one of the worst game clock managers I've ever seen. Captain Hook does better with clocks than Reid does.

Either team would be tough. For the sake of continuing a rivalry, I'd prefer the Steelers to come to Foxboro. The Patriots and Steelers are tied for the most AFC Championship game wins at 8 apiece (Denver also has 8). So the winner would claim that honor, and have a chance to add to their franchise's legacy with yet another Super Bowl win.

SUPER BOWL OPPONENTS: Dallas, Atlanta, Seattle, Green Bay, New York, Detroit
There are 2 teams in the AFC playoffs that scare me. There are 4 in the NFC. Thankfully the Pats will only have to play one NFC opponent to win it all. Just a quick thought on each possible opponent:

Dallas: I'd be worried unless Romo is still holding for field goals and extra points

Green Bay: Aaron Rodgers is 7-6 in playoff games and 3-5 since winning the Super Bowl

PREDICTION:
Patriots play the Raiders in the Divisional Round and win. Then they play the Steelers and win a close game. Then the play the Cowboys in the Super Bowl and win.