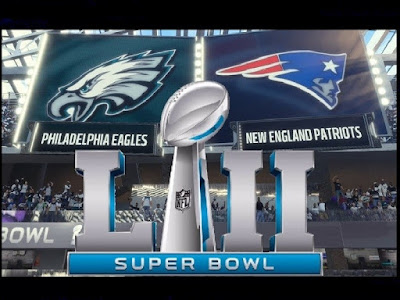 Patriots in the Super Bowl again. Feels like a sequel to Groundhog Day where the protagonist over and over lives the same football season every year. Patriots start out as favorites, meet adversity, get dismissed by pundits, win a few games, Pats haters whine about something, ESPN makes outlandish claims, Pats win two playoff games, two weeks of media garbage, concluded with a thrilling football game.

History will be made on Sunday. No player has ever won 6 Super Bowls. No player wearing an Eagles jersey has ever won a Super Bowl. One of those things will happen Sunday. With this drinking game, you too can make history. You too can be the GOAT of Sunday evening drinking and Monday morning hangovers. There are no days off when it comes to abusing your liver.

So get lubed up, do your job, and we're not done (drinking).

Danny Amendola gets the ball in a non-receiving way (run, throw, return) = 1 drink
Amendola makes a clutch catch = finish your beer
Dion Lewis or James White gets the ball in a non-running way (catch, return) = 1 drink
Matthew Slater makes a special teams tackle = 1 drink
Slater downs the ball inside the 20 = 1 drink for each yard inside the 20 (5 yard line = 15 drinks)
Slater lines up at WR = 1 shot
Bernard Reedy is on the field = entire beer
Kenny Britt catches a pass = finish beer
Dwayne Allen thrown to = finish beer

So enjoy the game. Then enjoy the ambulance ride, then the hospital visit, then the morgue. Your funeral procession can be like your own personal championship parade for winning this drinking game. The hearse is like a duckboat.