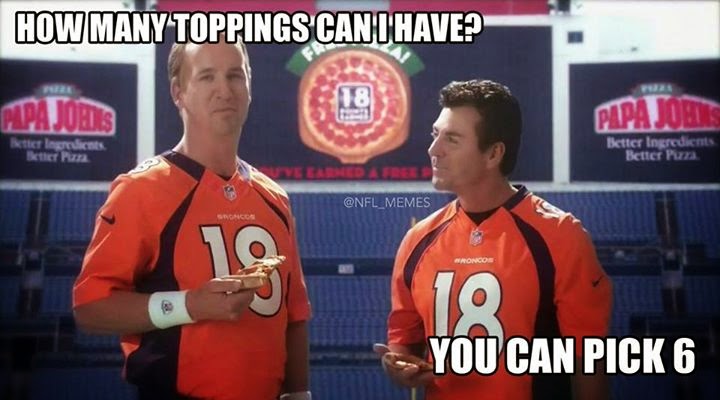 The Patriots clinched the #1 seed in the AFC playoffs thanks to Peyton Manning whizzing it down his leg against the Bengals.

Look, Manning is a great QB, and a Hall of Famer, and he's led his team on countless game-winning drives in the 4th quarter and overtime. But when did he get a reputation as a clutch quarterback, let alone as one of the most clutch QBs of all time, as Mr. Gruden was claiming moments before Manning threw a wobbly, game-ending pick? Did I miss that ruling on Peyton Manning? Was there a meeting where that was decided?

"One of the greatest crunch time quarterbacks of all time," was how Jon Gruden described Manning before that pick 6. Really?

I honestly didn't know what would happen last night when Manning got the ball back, down by 2, needing only a field goal to beat the Bengals. It was an exciting, tense, dramatic situation. And it was raining. And in hindsight, all that drama, plus some imperfect weather, those are ingredients for Manning Choke Soup.

Manning just can't let himself get past things. He obsesses over the weather, and scoreboard operators, instead of moving on with his life, and focusing on what HE can do to do his job well.

Let's think back to that story with the scoreboard operator in Denver. Peyton didn't like that the jumbotron was inciting noise from the Denver fans while the team was on offense. That's fine. But can't Peyton address that issue in-house? Can't he go to John Fox or John Elway and say "In the future, we need the scoreboard operators to help keep the crowd quiet on offense?" He's Peyton Manning! Doesn't he have enough influence in that organization to take care of the issue without going to the media? Can't he even go directly to the staff who operate the scoreboard and talk to them?

Nope. Because Peyton had to make it known to the entire world why he wasn't amazing at the end of a game his team won. And it was the scoreboard operator's fault. He didn't talk about it to the media to stop it from happening in the future, he talked about to explain what he saw as his inadequate play.

Could you imagine another QB in the League doing that? Brady? Ryan? Rodgers? Roethlisberger? Wilson? Romo (maybe)?

Could you imagine another QB in the League doing that and receiving nearly no criticism?

People like Peyton. He's polite. He's punctual. He wears suits to press conferences. I'd probably like him if  not for my favorite team competing against him for supremacy in the AFC. But if I wanted to like him, I'd also have to ignore the choking, the blaming others for failure, the way he lets things like the weather get to him, the endless commercials, the boring clean-cut Johnny Unitas routine, the accent that mixes together the most annoying parts of southern and midwestern, and the face. The Manning Face. The ultimate accessory in disappointing body language. Manning Face demoralizes teammates, not opponents. It's judgmental, it's sad, it isn't inspiring, it isn't unifying.

Give me Tom Brady unleashing torrents of F-bombs over Manning-Face any day.

The people who like Peyton Manning make compromise after compromise to like him. And good for them. I'm not as patient or forgiving with people as Manning likers. Ultimately, all that really matters to is that Peyton's failure on Monday Night Football propelled the Patriots the #1 seed overall in the AFC.

Winter is coming, and the best place to be in Winter is at home.