It was a bad year for the Bruins. No playoff hockey. Cap issues on the horizon. One bright spot was Patrice Bergeron. Who is also one of the few bright spots going forward. He won the Selke (again) for the best defensive forward. He was second on the Bruins with 23 goals, and led the team with 55 points. 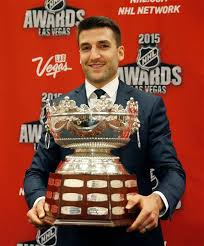 Surprisingly, this is only the second time Bergeron has won this award. The last was for 2006. Hopefully he wins more in the future, and hopefully some of his teammates play well enough to compete with him for the honor.