This Award goes to players who went from anonymity to superstars. For example, Koji Uehara won it for 2013, Danny Woodhead in 2010. This year's winner didn't have a great season, or even a great game.

It was one play. At least that's how we'll remember it. Malcolm Butler was the center of 4 big plays in the 4th quarter of Super Bowl 49. He broke up a few passes on key downs. He made a few important tackles. And of course, his interception. 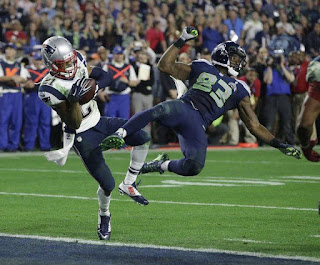 Most of us didn't know who this guy was before that night. Now everyone knows. Take Tom Brady's entire 2001 season and condense it into an hour of football. That was the night Malcolm Butler had.