Normally the A-Rod Award for choking goes to a Boston based athlete, or even an entire team. But nobody in sports last year choked more than Pete Carroll choked at the end of the Super Bowl, which allowed a Boston team to snag victory from the gum-chewing jaws of defeat. 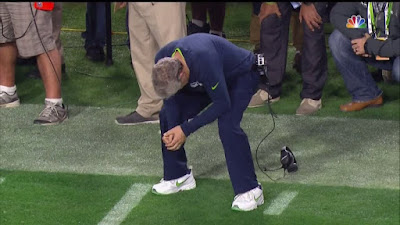 It wasn't just the decision to pass on the goal-line. It was letting the clock wind down before passing. It was having a team so disorganized and undisciplined that they had to burn a timeout after Kearse's catch. Then the penalties committed after Malcolm Butler's interception which removed all doubt.

The impact of Carroll's choking goes beyond one game and one championship. Think of the impact it had on the legacies of Tom Brady and Bill Belichick. Think of how many New Englanders would have willingly buried themselves and drowned in feet of snow had the Seahawks won that game. Pete Carroll's idiocy as a coach and impotence as a disciplinarian solidified Tom Brady and Bill Belichick as arguably the best at their jobs.