There are about 85 years left in the century. That's around 14,000 baseball games, over 7,000 hockey and 7,000 basketball games, and counting the playoffs, about 1,400 football games. Odds are, none of those games will be able to top Super Bowl 49 as the Boston Sports Game of the Century. 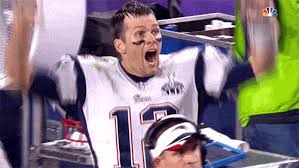 The game was great, but so was everything going on around it. The build up with DeflateGate. The story-lines of old dynasty vs. new dynasty, of attitude vs. adjustment, of Sherman vs. Revis, of Carroll vs. Belichick. The two most talented teams, the two toughest teams. A powerful running back, a powerful tight-end, formidable DBs on both sides of the ball. The anticipation was unreal.

The game itself surpassed expectations, featuring some of the best individual plays of the season. Great throws, great catches, great interceptions, from both teams. So many big plays. So many heroes. Brady, Gronk, Amendola, Edelman, Butler.

And it ended with the best quarterback of his era leading his team to victory. And the best coach of all-time seeing his adjustments, his pre-game preparation, and his audacity pay off.

The lasting impact of the game is another rarity. The Championship tore down the divide between the glory years of 2001-2004, and the "almost" years of 2005-2013. It launched Brady and Belichick into the "best ever" category.

It's very rare that a sporting event has such high expectations, then exceeds them, and then has a major impact in the history of the game. Super Bowl 49 did all of that.

And just imagine what enduring all those blizzards would have been like had the Patriots lost.