Bill Belichick the GM had been the focus of criticism in this town for 7 or 8 years. Some of it deserved, much of it exaggerated, most of it emotionally overblown. Somehow as a GM, the 2007 team he assembled was inadequate. And the 2011 team, with an unhealthy Gronkowski in the Super Bowl, was insufficient in the talent department to win. He was even blamed for Gronkowski's injuries.

The Patriots' mantra in 2014 was "Do Your Job." The GM's job is to put together a team capable of winning. And that's what Belichick did. And all the critics of Belichick the GM can shut up, finally. From familiar faces like Tom Brady and Vince Wilfork, to a 2nd round steal like Rob Gronkowski, to ring hungry Darrelle Revis, to a former Kent State quarterback turned receiver, to an oft-injured replacement for Wes Welker (who is himself now oft-injured), to an undrafted free agent out of West Alabama named Malcolm. 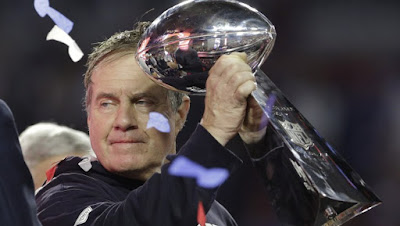 The team was built for toughness and versatility. It could beat you with offense and defense. And they were physical.

Belichick was also the coach of the year. He kept his team focused even when they were 2-2. He didn't allow DeflateGate to distract them in the Super Bowl. He and his staff prepared his team to make big plays, made the right adjustments during the game, and had the balls to let the clock run out in the 4th quarter.