The Dan Shaughnessy Award is typically given to a single sportswriter or sports radio personality. Past winners include Shaughnessy himself, Michael Felger, Ron Borges, John Dennis/Gerry Callahan. This year's winner is a little different. 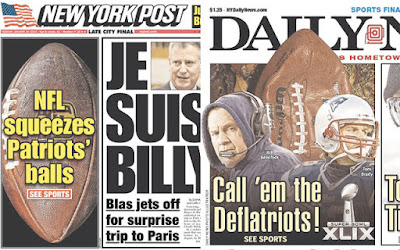 The media didn't just cover DeflateGate, it became an active participant. A leaked report with incorrect details about air pressure started the DeflateGate circus. Sources within the NFL used the media to stoke the flames until the story became self-aware and spread into mainstream media. You had Good Morning America talking about inflated footballs. Scientists were canvassed for their expertise. Ex-players, lawyers, children.

Facts were obstacles that could only slow down the rapid firing DeflateGate media machine. As Gene Hackman's character in The Birdcage said: "People in this country aren't interested in details. They don't even trust details. The only thing they trust is headlines."

Actual journalism has been dead for many years, DeflateGate was simply the pressure gauge that proved that all the air, and with it all the standards and quality of the media, had leaked out and dissipated.