The Harry Frazee Award for Goat of the Year is given to the sports figure who was the most disliked, derided, even detested character in Boston sports. Basically the guy sports fans would be happiest to see leave the city. Past winners include Manny Ramirez (twice), J.D. Drew, John Lackey, Tyler Seguin, and Randy Moss. It is named after the owner of the Red Sox that sold Babe Ruth and a number of other great players to the Yankees. 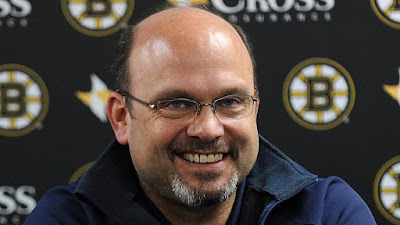 Unfortunately, there were a number of other candidates for this award, most of them with front office jobs on Yawkey Way. Chiarelli, however, was completely in over his head as Bruins GM. The cap was mismanaged, the drafts were poor, deadline trades didn't get done, contracts were extended too early for too long. It was just a disaster.

He's gone to Edmonton, and good luck to him.