By winning his fourth Super Bowl, Bill Belichick cemented his legacy as the greatest football coach of all-time. Among Boston coaches in all sports, he's second only to Red Auerbach. NFL coaches can only dream of achieving half of what Belichick has achieved. 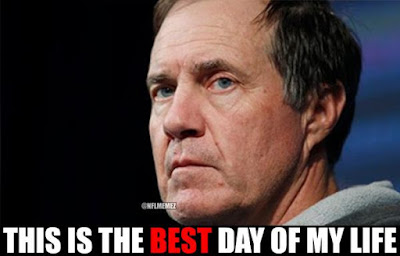 Four Super Bowl wins as a head coach, 2 more as an assistant. He's been part of 8 Super Bowls spanning 4 decades. Named Coach of the Year 3 times by the AP. His defensive gameplan from Super Bowl 25 is in the Hall of Fame.

One of Belichick's biggest strengths is his ability to move on from adversity. "We're on to Cincinnati" became a theme of the 2014 season, but moving on has been a key part of Belichick's career. He was a failure in Cleveland, but was able to learn from the experience and move on. When the Patriots lost Bledsoe in 2001, he and the team moved on. When they lost 31-0 to the Bills in 2003, they moved on. When the SpyGate story erupted, when Brady got hurt in 2008, when Aaron Hernandez murdered people, when the team was 2-2 last year and people were questioning if Tom Brady should be the quarterback, when DeflateGate broke. Belichick moves on.

No team excels in the face of adversity like Belichick's Patriots.

His aggression has sometimes been questioned, and it hasn't always worked out, but that aggression is why he and the Patriots are 4 time champions.

You could write a 200-page thesis paper on leadership by talking about Bill Belichick. So I'll stop myself here.

But Belichick has yet to stop. He's still doing his job.